When he was 14 years old, the doctors discovered a tumor in Eliav’s brain.

Now, at age 16, Eliav is thankfully recovering from his disease, though he still facing challenges with his balance and motor skills.

Eliav is a part of the Gamani community, a Larger Than Life support program for adolescents. One of his biggest challenges was during an adventure outing with the other Gamani teens, where he was faced with a rock climbing wall.

“I initially felt intimidated by the challenge in front of me, but was willing to try it. I am so happy that I ended up attempting the climb! I climbed to the top of the wall, and felt really good when I completed it.” — Eliave, age 16

When Eliav grows up, he wants to be a doctor. It’s important to him that he works in a profession that helps people, and he hopes to be able to help other children who are facing the same condition he faced.

We're not around right now. But you can send us an email and we'll get back to you, asap. 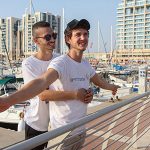 “Artiom Is Ready To Enjoy Life, Says “Cancer Was a Major Wake Up Call”Happiness 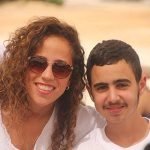